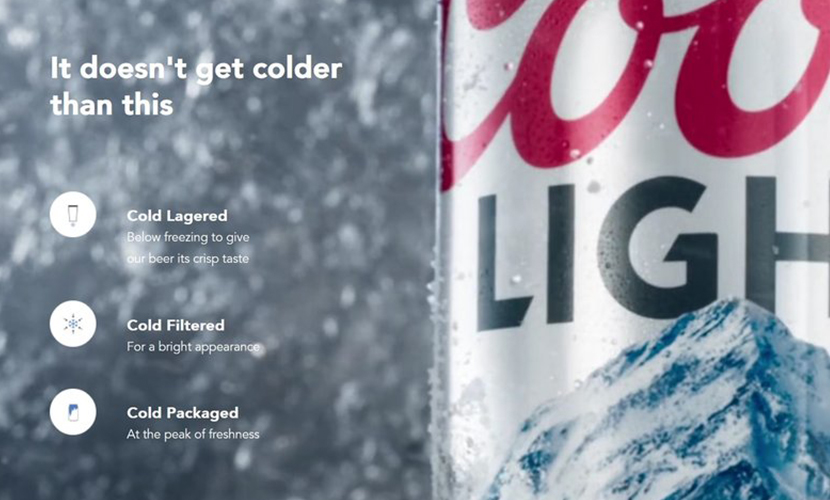 Year after year we get slammed with an endless parade of beer ads. A few campaigns make us smile. Most make no impact at all and we’ve long forgotten.

The forgotten ones are failures—of course; but even the memorable ones sometimes fail to move another keg out of the warehouse.

So what’s the problem?

How the heck is COLD a differentiator? It has nothing to do with the actual product itself, and everything to do with how we as the customers prepare it. When a brewer advertises its beer as cold, you know there is literally nothing unique about it. It’s swill at best (in an average looking can).

The more a beer is advertised, the worse it must be.

It’s the only way you can explain how the conglomerate brewers get their crap into the hands of the masses. It’s forced down our throats with billions spent on advertising dollars, exclusivity rights, under the table deals, strong arming bar owners, and prime locations in the liquor store shelves. Consumers don’t have much of a choice but to give in.

Then there’s the mysterious case of the Brooklyn Brewery…

Located in the heart of New York’s trendy boroughs, the Brooklyn Brewery is one of the coolest American craft beer manufacturers around. Over the course of its 26 year history it has amassed a loyal tribe of die hard fans, all jonesing for a sip of its sweet malts.

The most interesting brand in its arsenal of beers is Brooklyn Black Ops. The name alone demands attention. And, if you’re one for reading labels you’ll be captured immediately by the story found on the back.

“Brooklyn Black Ops does not exist. However, if it did exist, it would be a robust stout concocted by the Brooklyn brewing team under cover of secrecy and hidden from everyone else at the brewery. Supposedly, “Black Ops" was aged for four months in bourbon barrels, bottled flat, and re-fermented with Champagne yeast, creating big chocolate and coffee flavours with a rich underpinning of vanilla-like oak notes. They say there are only 1000 cases. We have no idea what they’re talking about."

Now that’s how you differentiate a beer.

It has everything an unsuspecting consumer could want. Mystery? Absolutely. Romance? Definitely. Taste? Without a doubt. Exclusivity? Yup. There’s only 12,000 bottles available.

And while many might balk at its premium price tag of $38 a bottle, it’s a highly profitable beer. It has all the makings of an incredibly positioned brew. So the question remains, when will the big boys will learn to take a page out of Brooklyn’s book? #comeon #tryharder

2 Replies to “Beer Advertising (An Epic Failure in Differentiating Brands)” .

I think some advertisers will always say the same thing. Here in Brazil the beer ads ALWAYS show a group of man friends on the beach or pool, and A LOT of women’s butts! Beer here is related with summer, beach and woman. So boring.

Olá Júlia! Thanks for popping in and dropping us Canadians a line. It sounds like Brazilian advertisers are just as lame as ours! Is there anyone who you think does a really good job of marketing their beer? Tchau for now. 🙂