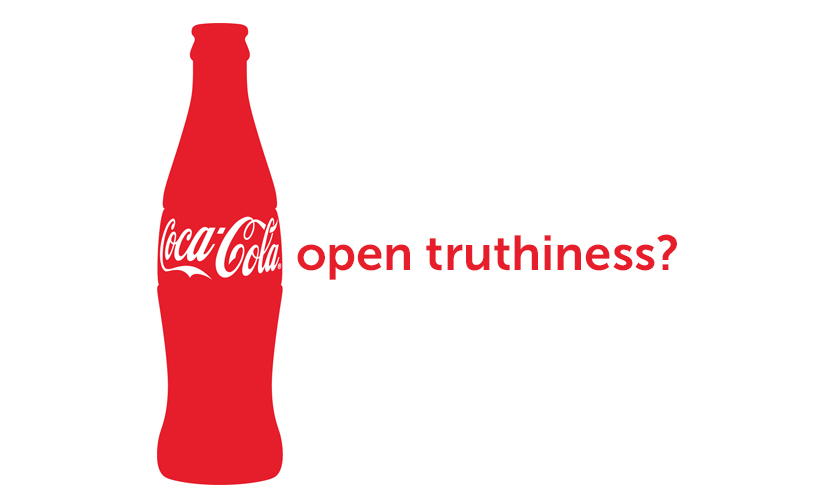 On January 14th 2013, Coca-Cola launched an advertising campaign aimed to “tell the truth" about its products.

The campaign is Coke’s offensive play against the rising criticism of fast food and sugar filled products and an attempt to retain consumer loyalty by being “honest."

Unfortunately I don’t think the message is all that honest. It’s another fluffy, feel-good ad that doesn’t really discuss the issue of obesity. The subject of obesity is lip service at best.

Using the exact same imagery and much of the same messaging as the original, this unofficial ad contains the “real" truth. The truth that nutritionists and other commentators wish Coke had actually communicated.

Wouldn’t it be cool if Coca-Cola launched a campaign similar to the unofficial version?

Sure it would incredibly ballsy, but I think this kind of honesty would be truly visionary.

If Coca-Cola were to say, “this is the truth and these are the consequences…and it’s your choice and you are in control" then it would be seen by consumers as being responsible and forthright. Hence, the next time someone chooses to by a can of pop, they’ll turn to the brand that they trust to be honest with them. Instead Coca-Cola’s only danced around the truth and I highly doubt the campaign will achieve what it was intended to.

What do you think? How would the real truth affect consumers and the Coke brand relationship? Would a real truth campaign hurt the company as attitudes and increasing knowledge towards health and nutrition shift? Or would it help the company as they are seen as being responsible?

3 Replies to “Coca-Cola’s Bold Move to “Tell the Truth” Not the Real Thing” .

I think it depends on the public’s general level of health education as Coke’s market is for anyone with a mouth.
The more aware the general public is becoming of the health information the more Coke should be transparent. So to answer your question, I think Coke has made the right decision regarding the level of honesty they’ve released at this point in time.

Interesting point James, although I will have to disagree about the level of honesty being where it needs to. In my opinion honesty is black or white. You are either honest or dishonest. Not “sort-of” honest.

I believe Coke has an opportunity to lead the way and write the book on honest soft drink advertising. It’s a proactive strategy that puts Coke in the driver seat. Instead it’s taking a reactive stance, which in my opinion only delays the inevitable fate of one day being forced to communicate public health organizations’ messages in the same way cigarette companies have had to operate. I think a surgeon general’s warning label displaying a picture of an obese child with a diabetic amputation is much more damaging to the brand than a thoughtfully written message from Coke itself.

I fully understand where you are coming from. But I think the fundamental reason behind the ad is to create a better image thus ultimately generate more sales.

To create a message for Now and not in 4 or 5 years time, because people tend to have short memory spans and are really just interested on the benefits related to them Now. (just look at how people vote, and the countries working together with a war history)

I think coke through this add have addressed the majority’s concerns regarding some basic issues, I understand that it’s a facelift and not a all healing surgery in terms of good Ethics.
But coke and other businesses alike is never about what’s really good or bad right.

I think they are right in the approach of advertising for the market now, and not for what the general public might know more about in the years to come.

Do you think If the tobacco companies mass advertised their real stories 20 years ago, when the general publics knowledge of its health damages was still in a primitive state, really that good for the company?
Or advertise the general perceived truth today and get the same general consent of (care factor) without the extra damages.
That way they can buy themselves more time for a smoother transition IF they by chance really wanted to be Sincere in the future.

At the end of the day, the truth is only as real as what your target market believe it to be. Coke is just a business to make money, not to care.